Wolverhampton Wanderers reportedly wanted to strengthen the centre-back position in the last window and Sven Botman was identified as a target by the English club.

Back in August, Voetbal International reported Bruno Lage had asked Wolves for the 21-year-old.

A deal never took shape and the defender is still with the Ligue 1 side, with whom he won the title last season. Botman’s impressive form for the club resulted in him attracting interest from a handful of clubs in the summer.

L’Equipe on Tuesday has a report on the Dutchman, mainly focusing on his return from a groin injury he suffered in October.

On the player’s impending return, the newspaper states: ‘Lille will therefore recover one of its pillars of the title season and one of its players with the highest market value, which is far from trivial in the current economic context.’

It’s then explained Botman was one of the Lille players who was ‘most in demand’ last summer as he was wanted by Wolves, Sevilla and Atalanta. 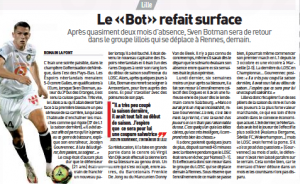 However, the French champions ‘closed the door’ as they had no plans to cut ties with the player, a year after buying him.

Talking about the winter market, L’Equipe explain the ‘courtiers have not disappeared’, which would suggest Wolves are still keen.

The coming months will be key, to see Botman’s level as the summer approaches, and which other clubs come forward.