On Wednesday, we relayed quotes from Ola Aina, currently on loan at Torino, given during a press conference, and the young full-back seemed happy with his choice.

Praising the club, its history and its current manager, Walter Mazzarri, the Chelsea defender was intent on making a name for himself at the Serie A outfit, having already starting three of their first four games.

Gazzeta dello Sport, we’re guessing just after the press conference, sat down with the 21-year-old, and had a slightly longer and more private chat with him, including a chunk about his relationship with the Blues’ former manager, Antonio Conte.

On their relationship, he said: “It’s very good. I’m happy to have been trained by and played for him. I consider him an honest and sincere man, who gave me the chance to play, and I have a lot of respect for him. I know he lives in Turin, but we haven’t been in touch since I got here”. 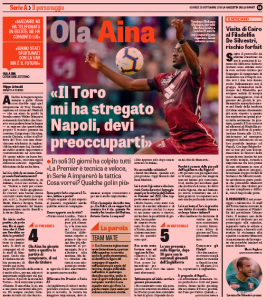 One point we mentioned in yesterday’s article was the fact this wasn’t just a ‘dry’ loan, as Torino had the option to make the move permanent towards the end of the season if they so wished.

For Aina, however, that’s not an issue.

He continued: “I would never change my decision to come here, but we don’t know our future. I’m happy to play in Turin. We’ll see about the rest later”.

To us, that sounds like a man who isn’t particularly fussed if he doesn’t return to Stamford Bridge at the end of the campaign.