Steven Gerrard will take his men to Estadio de la Cerámica as Rangers face Villarreal in the Europa League clash on Thursday.

On September 19th, we carried a story from AS, who were talking about the Gers’ record in Spain as they have failed to win any of their fixtures and have not found the back of the net against any of the La Liga sides since 2006.

Thursday’s edition of the same publication talks about how Javier Calleja’s side will lineup for the European fixture against the Scottish Premiership side.

It’s claimed that the hosts are the clear favourites to win the clash, having won three of their previous meetings against today’s opponents, but they will have one eye on the weekend’s derby clash against Valencia. 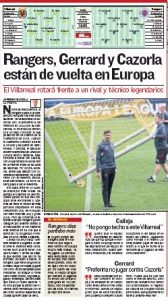 The Yellow Submarine signed Ramiro Funes Mori from Everton in the summer and he could start against Rangers, while another new signing, Karl Toko Ekambi, who has started in the league fixtures and is yet to get on the scoresheet, will make way for Carlos Bacca up front.

Villarreal are likely to go with a 4-4-2 formation with Gerard Moreno and the Colombian leading the attack, while the former Toffees man could start in the midfield rather than his preferred centre-back position.

The report also mentions that Gerrard has a hard task ahead of him in the European fixture, and it’s not just because of the hosts’ fans are on par with Rangers’ rivals, Celtic, but also due to the fact that Villarreal players who have struggled to get playing time may have a point to prove to Calleja.