Home Premier League Chelsea Chelsea have ‘legality and time’ on their side – Blues made new...
SHARE

Antonio Rüdiger’s contract expires in 2022 and Chelsea reportedly opened talks over a new deal in August.

The defender is yet to sign an extension and his situation with the Blues has drawn attention from other clubs.

Rüdiger will be eligible to sign a pre-contract with a club outside England from January 1st, if Chelsea fail to tie him down to a new deal.

Real Madrid, who are ‘attentive’ to the centre-back, have a plan to sign the 28-year-old on a free transfer next summer.

That’s according to Marca, who add the La Liga side are ‘waiting for events’, and they ‘listen and analyse everything’ related to the Germany international. They are monitoring the former AS Roma man in action for club and country.

Rüdiger’s ‘idea’ is to wait and pick a destination from those clubs who want him. At the moment, he has to wait since the ‘legality and time’ is still on Chelsea’s side. 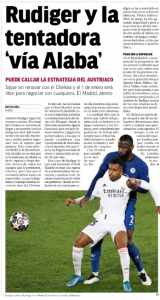 Thomas Tuchel and his side are keen to retain the player and to do that, the Blues made a new approach to his agent two weeks ago.

The Champions League winners don’t want to give up on their efforts to keep Rüdiger at Stamford Bridge, so others have to wait.

Real Madrid, meanwhile, are one of the clubs who continue to be ‘attentive’ to his situation at Chelsea.