Much like many players around Europe, Lorenzo Insigne’s contract at Napoli is expiring, and he’d like a new and improved one.

Napoli are prepared to offer him a lengthy deal, but the wages on offer (€4.6m/year) are a bit short of what the Italy international wants (somewhere between €6-7m).

That’s opened the door for many interested parties to keep an eye on the situation ahead of January, when the player will be able to speak to other teams freely about a potential free transfer, and that includes Manchester United.

Previously linked with Tottenham in the Premier League, Insigne is now reportedly on the Old Trafford club’s radar, according to Gazzetta dello Sport, who cover the winger and his issues on Tuesday.

It’s explained initially that ‘Inter’s attention for the Napoli captain has never waned’, and they ‘would also be willing to pay him the €6m salary’.

However, outside of Italy, the situation has ‘inevitably aroused the interest of some European clubs’, which is when Manchester United are mentioned.

Gazzetta point out that Ole Gunnar Solskjaer’s side ‘would not mind dealing with him and, probably, if he were to leave Naples, Lorenzo would also not mind living the Premier League experience in one of the most prestigious clubs in Europe’. 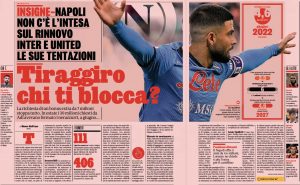 That being said, his first port of call would be to resolve the situation with his current side and stay there, having come through the youth system and played his entire career in the south of Italy, barring three loans as a youngster to gain experience.

However, since there is currently ‘not even a shadow of a renewal’ agreement, and Luciano Spalletti has used him sporadically in the last four games, playing just 171 minutes from a possible 360, there are some who are starting to believe this could be the beginning of the end for the club legend.

We’ll have to see, but Manchester United are now in the mix, and knowing how these things tend to go, it could grow exponentially in the coming weeks.