Sergio Leon has started only once in the league for Real Betis, while he has four more starts in the Europa League this season.

He was on the bench in the Copa del Rey clash against Real Sociedad and during his side’s league defeat to Real Madrid this month, but that was just to make up for the numbers, according to AS.

The Spanish newspaper claims the striker is not included in Quique Setién’s plans and wants to leave the La Liga outfit in January. This is when Cardiff City’s name is mentioned in the report.

It is explained the ‘most striking’ offer for the 30-year-old came from abroad and that was from the Bluebirds, but he’s unlikely to join them, even though he wants to leave Betis this month.

Valencia are expected to take him on loan until the end of the season and as a part of the deal, will include an option to purchase.

However, Los Verdiblancos want a permanent transfer or loan with mandatory purchase option for €5m-€6m.

AS’ report doesn’t mention why Cardiff did not pursue Leon or why the attacker will not join Neil Warnock’s side. 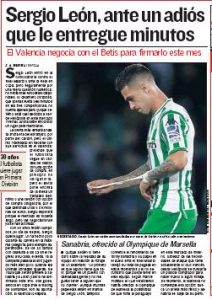 The only possible explanation we can think of is because the Premier League side are chasing Nantes’ Emiliano Sala, with whom they talks on Monday.