There was once a time when Vincent Janssen was continually in the Dutch media.

It started off with the player’s good form in the Eredivisie and then the rumours of interest from other clubs.

Naturally, when Tottenham came calling the whole thing turned into a saga and the London club eventually got their way, although likely paid AZ more than they would have wanted to do.

Then the Dutch newspapers followed Janssen’s progress and his struggle for goals at Spurs. And his subsequent move to Turkish football and issues with injuries.

Tuesday’s edition of De Telegraaf has a large article on the player’s situation, and it’s explained that whilst Mauricio Pochettino has made it clear there’s no future for the player at Tottenham, the striker is sill waiting for the ‘green light’ to be able to leave the club.

Daniel Levy is, however, playing hardball. 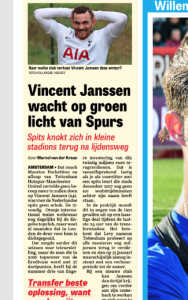 De Telegraaf say a loan makes the most sense, but the Spurs transfer chief wants to recoup as much of the near €20m transfer fee as possible.

A permanent deal is preferred, but it’s thought that’s unrealistic, and therefore it’s expected this could drag on until January 31st, when Levy will be forced to find a quick solution, which may not be the best for anyone involved.