Pedro Caixinha’s big plan next season is to get Rangers much closer to Brendan Rodgers’ Celtic. The Portuguese manager has said it often enough since taking over at Ibrox, but actually getting closer to Celtic is going to be far harder in practice.

Rodgers may well lose a star or two this summer, but whilst rumours about Moussa Dembele leaving Celtic Park won’t go away, there doesn’t appear to be anything hugely concrete at the moment.

To get closer to Celtic it may be considered likely that Rangers would have to spend more than the Scottish Premiership champions, but Caixinha has made it clear that isn’t going to happen. In a several part O Jogo interview, the Rangers boss was asked about his plans.

“The truth is that they did not give me a ‘budget’. They told me to evaluate, make decisions, sell and loan, and present what I wanted. I probably don’t even have half the value to buy when compared to Celtic.”

What Caixinha does have is a very clear idea of how he wants his Rangers squad to be, and he told O Jogo: “We went to get Bruno Alves… I want him to be one of our great leaders, both in the club and on the pitch. Despite his age he’s a great professional, can give us a lot and fits in perfectly. Then Fabio Cardoso, who will learn a lot from him… and also 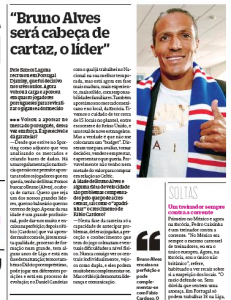 Dálcio on loan, who can play in different positions and is in the process of evolution; And Daniel Candeias with whom I have worked for Nacional in his best season, but he is now in a more mature, more experienced, more solid phase with family responsibilities.

“We also bet on the Mexican and local markets in Scotland. We were careful to have about 15 backgrounds in the squad, between Scots and the UK, and a total of nine foreigners.”

To compete with Celtic, or at least get closer to doing so, Caixinha is well aware he needs to get the most out of every player, and he believes Alves and Cardoso will work very well together.

Will it be enough to make Brendan Rodgers and Celtic worry? Only time will tell.