Home Uncategorised Club still waiting for Liverpool or Chelsea to offer the most, and...
SHARE

Less than a week ago A Bola reported that a straight fight was set up between Liverpool and Chelsea for Ruben Neves. The 20 year old media has faced serious stutters in his progression at Porto, and would likely rather forget last season.

Nuno Espirito Santo more or less brought a halt to the player’s development, whether purposefully or not. In August of last year, the youngster could be seen in tears on Porto’s bench after Nuno reversed a decision bring him on.

Given the stalling of his progress, Neves would be fortunate to have Liverpool and Chelsea interest, and it’s hard to see them realistically fighting each other. 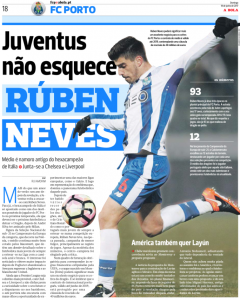 Perhaps it’s a little unfair on the young midfielder to dismiss the idea. Sure, if there’s a bargain to be had then it could be worth it, Neves looked great coming through and just because he then struggled under Nuno it doesn’t rule the youngster out.

A Bola say Porto are still awaiting an offer, which is the cue for Liverpool and Chelsea, now joined by Juventus, to ‘fight’.