Home Premier League Burnley “Then a strange period followed” – Steven Defour on it all going...
SHARE

Yesterday, we covered claims from DH that Steven Defour wanted out at Burnley, with a transfer to Dubai or China at the top of his list.

The newspaper explained that, with the World Cup not a priority for him, the Clarets midfielder wasn’t too fussed about his next destination, as long as he played football and was happy.

While part of that appeared to be true, the player clarified a few things on Friday to Het Nieuwsblad, revealing that his aspirations of wearing his country’s shirt hadn’t quite died yet, helped by a recent visit from Roberto Martinez, who gave him some advice.

The manager said: “Steven had the bad luck that other players in his position played more minutes. I recently visited him in Burnley, and he can certainly bring us something. Only he needs a fresh challenge.” 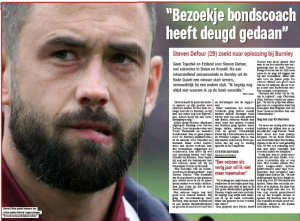 Blocked by some talented youth like Youri Tielemans and Leander Dendoncker, it appears the door is always open for the Burnley star, only if he gets regular first-team football.

As for what happened at Turf Moor, the midfielder isn’t 100% sure.

He said: “I’m not complaining about my choice because it went well in the beginning. The manager (Sean Dyche) believed in me and I played well. Then a strange period followed. I still don’t understand why I ended up on the bench, but that happens in football.”

Defour also revealed he hasn’t spoken to Dyche since the end of the season, but he did hold a meeting with the club, who told him they would not stand in his way if he wanted to leave.

However, the only way he could leave was if they managed to recoup a large chunk of the £7.3m they paid to Anderlecht last year, which his agent understands.

Christian Pala said: “They want to get their money back, that’s logical. Even though the price will depend on the league where he goes. An English club will have to pay more than a foreign club.”

However, before he makes a decision, Defour says he wants to evaluate all of his options, and not just do what’s best for him, but also what his girlfriend wants.

But, there is one country he won’t be going to just yet, and that’s Belgium.

He explained: “I have always said that I only want to play for KV Mechelen in Belgium but only to end my career. And I’m still not there yet. I’m still motivated to play at the highest level. At Burnley, I had some good times. Unfortunately, it didn’t last.”