Home Premier League Brighton Brighton player speaks of former club as if he was still there,...
SHARE

Among the several stories ahead of Juventus’ Champions League match against Sporting tonight, local newspaper Tuttosport managed an interview with a player who has experience both in Serie A and for the Portuguese club.

That’s Brighton & Hove Albion’s Ezequiel Schelotto, who spent five years in Italy before moving to the Lions, and played there for two seasons until joining the Premier League side this summer.

The player gave an interesting interview about the match, and wasn’t afraid of explaining how much he still likes Sporting.

“I left Sporting on August 31st, on the last day of the market I transferred to Brighton in the Premier, my heart is still in Lisbon: I follow all Sporting matches, I contact my ex-teammates daily, and every time I can, I go back to Lisbon, where I have an Italian-Argentine restaurant. You will see, we will make a great match against Juventus.” Schelotto told Tuttosport.

Questioned about the way he speaks as if he was still a Sporting player, Schelotto said: “I feel like one of them, I’m spontaneous to say ‘we’ and not ‘they’. I was in Lisbon when the Champions adventure began.” 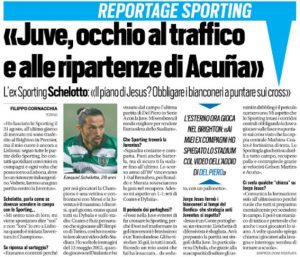 On the Champions League draw, he claims that his former teammates were pretty satisfied about it: “We were happy because, for us players, the Champions is a showcase and facing Messi and Juventus is the best thing.”

He was also asked to speak a bit about the Sporting manager Jorge Jesus, who he compared to Antonio Conte: “He only announces the lineup in the last moment because he wants everyone to be ready to go to the pitch.

“And then he is a tactical maniac and wants his players to be too. Jesus is a Portuguese Conte, a winner. The defensive label he has is wrong.”

Considering the way Schelotto speaks as if he wished to still be a Sporting player, this interview comes at a very interesting time. Because last week, the Portuguese press revealed that he only left Sporting for Brighton because of a behavioural problem, which led Jorge Jesus to tell him to go. Maybe he regrets that episode.