Loaned from Brentford FC to Viking Stavanger until the end of the month, Icelandic goalkeeper Patrik Gunnarsson is enjoying himself in Norway.

The 21-year-old has quickly impressed at the club, and now the Eliteserien side are thinking about buying him.

This is according to their sports director Erik Nevland, who spoke to the Stavanger Aftenbladet about the possibility of acquiring the Brentford man on a permanent basis.

He said: “We have talked to Patrik Gunnarsson, speak the same language and want to make a permanent transfer. There will be more conversations in the future”.

While he is contracted to a Premier League side, which normally causes an issue for clubs abroad, it appear there is some confidence that a deal could get done, helped by the fact his deal with Brentford expires in 18 months time.

In fact, Nevland confirmed to Aftenbladet that talks had been held with Brentford about it.

While the Bees are reportedly ‘open to discuss’, they do want Gunnarsson to return when the Norwegian season ends next week to chat with their player and see what is best for all parties.

Viking have yet to make an offer and are currently simply awaiting for those talks to take place before making their move. 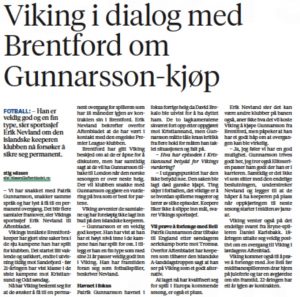 Nevland said of Gunnarsson: “Gunnarsson is a very good goalkeeper. He has shown that he has a high level inside the matches he has played for us.  In addition, he is a nice type who with his 21 years fits very well into Viking. He has the future ahead of him as a football player”.

The sports director also made it clear there might be competition for the player and that he had ‘no idea’ how much Brentford will ask at this moment in time.

As said above, there is, however, hope. He added: “Yes, I feel we have a good opportunity. Gunnarsson thrives here, I also think the Elite Series suits him well where he is in his career. At the same time, we are not the ones making the final decision”.

Nevland also spoke to Rogalands Avis about Gunnarsson, repeating much of what he told Aftenbladet, insisting that ‘it lies with them’.