Home Europe “We need to see him” – CL match to have impact on...
SHARE

When moving to Sporting on a loan from Everton last summer, goalkeeper João Virgínia already knew he wouldn’t have a lot of playing time with the Lions.

The Lisbon side already have Antonio Adán as first option for the position, so the Toffees’ player would arrive as support and competition, whilst Sporting judged his potential to stay at the club.

Vírginia only has three appearances for Sporting so far, all of them in Portuguese cups, but it turns out he’s now expected to face a big challenge tonight.

Sporting manager Ruben Amorim has confirmed that the Everton loanee will start in the Champions League match against Ajax. They want him in a big test that will impact on their decision to make the move permanent. 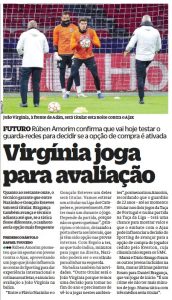 “Another one in starting line-up will be João Virgínia because we have a decision to make at the end of the year and we need to see him play in these environments,” said Ruben Amorim in a press conference (via O Jogo).

The Portuguese media has repeatedly been saying that Virgina’s permanent move would cost Sporting a fee of €3.5m.