Manchester City loanee Pedro Porro had another great display for Sporting at the weekend, when the Lions beat Benfica 3-1 at the Estádio da Luz in the Lisbon derby, and ended up being praised by his home country’s media.

And it turns out that when speaking of the fullback’s evolution, Spanish outlet AS also talked about the growth in his market value, as that may impact the interest from La Liga sides in his signing.

The report claims that both Atletico Madrid and Real Madrid both ‘stay very attentive to the evolution’ the player is having in Lisbon, while his value on Transfermarkt now reaches €20m.

Even though Real Madrid have been linked to Porro for a while now, Atletico Madrid’s interest seems to be something new. And that’s why AS’s report now gets attention from the Portuguese media as well. 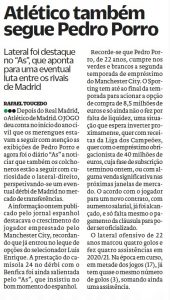 Newspaper O Jogo today features a piece agreeing that Porro has been doing great at Sporting, and of course pointing out that it’s a matter of time until he signs for the Lions on a permanent deal.

The Lisbon side need to pay Manchester City €8.5m to keep the player. The outlet says the payment hasn’t been made yet because the Portuguese side are having financial struggles, but those problems should be sorted before the end of the season.

O Jogo reiterates Porro already has an agreement for a new contract at Sporting, where he’s also getting a pay rise, so all that is left is the buying option being triggered. The newspaper doesn’t even mention the chance of the player going back to Manchester City and then being sold to the Spanish sides.

So even though there could be a big battle for his signing in the summer, the Premier League side shouldn’t get more than €8.5m anyway.