Just when you thought the Bernardo Silva racism incident had died down and everyone was moving on, Portugal have decided otherwise.

The Manchester City midfielder was charged with racism earlier this year after his ill-advised tweet to teammate Benjamin Mendy.

He then received his punishment earlier this month, with the FA deciding to ban the Manchester City star for one game, fine him £50,000 and send him on an education course as well.

That, everyone thought, was the end of the matter and the whole thing could be filed away and forgotten about. It seems, though, the Portuguese parliament don’t want to do that.

Instead, it seems some parties want to give the hornets’ nest a nice swift kick and open up the wounds all over again.

The newspaper explains that the CDS-PP, aka the People’s Party, presented a motion to repudiate (refuse to accept/deny the validity) of the FA’s decision.

The first part of this motion, which pointed out there was ‘no racist intention’ from the Manchester City man, was ‘unanimously approved’ by everyone.

“It is important to separate what racism is from a joke between friends who esteem and respect each other,” read the document.

“Something that did not happen to the athlete Bernardo Silva, of impeccable sports ethics, fair play recognised and praised by all coaches and players.” 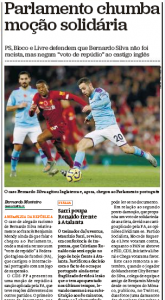 However, the second part of the motion was not as loved. That proposed a ‘vote of solidarity’ and saw the Socialist Party, Left Block and Free vote against, the PAN abstain and PSD, CDS, Liberal Initiative and Chega voted in favour of it.

Ultimately that saw the motion rejected, a fact the Bernardo Silva is pretty relieved about. He and Manchester City could do with just moving on.