With Tottenham now firmly in the rear-view mirror, Mauricio Pochettino will be looking to the future and where he ends up next.

Bayern Munich is seemingly the most likely option given the German champions are without a permanent boss following the sacking of Niko Kovac.

However, they are not likely to be the only interested party. Real Madrid is a potential destination, while Manchester United have also been long-time admirers of the Portuguese boss.

And it seems that admiration has not gone away, despite the fact United are seemingly committed to Ole Gunnar Solskjær long-term.

Diaz says Pochettino has become ‘one of the most coveted pieces in the coach market’ which is no surprise given the success he enjoyed for the majority of his time at Spurs.

He then points to Bild’s claims that Bayern Munich are keen on the Argentine before stating that Marca, his newspaper, can ‘assure’ it’s readers that it’s Manchester United who are actually at the front of the queue.

Diaz does not divulge how he knows this, but, it’s a bold statement from the editor of one of Spain’s major newspapers and not one he would make without good cause. 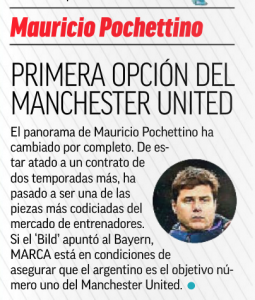 There’s no mention when United may make their move or any suggestion that they will, just that Pochettino is the man they want if a managerial change is needed.

That will rest on Solskjær’s performances, and the Manchester United boss must surely be feeling the pressure with Pochettino free.