Despite what certain sections of the new media elite in England are saying, there is a genuine belief in Italy that Arsenal are interested in Carlo Ancelotti.

How advanced talks to that regard have gone, however, differs from newspaper to newspaper, with Thursday the perfect example of this.

We’ll start with Gazzetta dello Sport, who report Ancelotti is now in Canada, at his Vancouver retreat, ‘waiting for the right call’.

It’s said Arsenal are a ‘hypothesis’, but ‘there has yet to be contact’, even if it’s ‘sure’ that a return to the Premier League with a profile like the London club’s is an idea that ‘intrigues’ him, but it’s too soon to talk about it.

However, at Il Mattino, the local Naples newspaper, the story is very different. 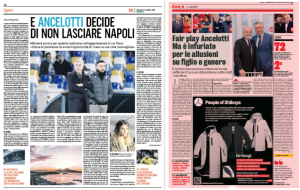 They report ‘it isn’t a mystery that Ancelotti has spoken in a more or less official manner with Arsenal’, and that during the last international break (in mid-November), the manager travelled to London.

The official line for the trip was ‘personal motives’, but ‘there are many ready to swear that it was for a chat with the Arsenal board’.

One thing is certain, Ancelotti certainly has the experience to turn things around at the Emirates, even if he might not be the long-term option those in charge have in mind.