Tottenham Hotspur would have very much liked to get some revenge on Bayern Munich this week. Jose Mourinho wasn’t in charge for the 7-2 loss at home to the Bundesliga side, but he too would have been keen to show that with him in charge things are very different.

It didn’t go the way Spurs and Jose will have wanted, although they avoided such a heavy defeat this time, losing 3-1 in Munich.

German newspaper Bild have rated the players following the match and it’s a mixed bag.

Bild’s player ratings are very different to what we’re used to. Whilst most ratings are out of 10, or sometimes 5, they use the German school grading system. 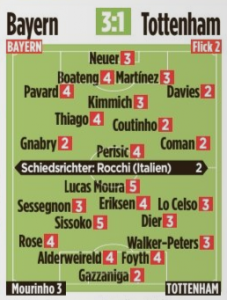 Thankfully, none of the Tottenham players were given a 6, but two did pick up the ‘deficient’ 5 rating. That went to Lucas Moura and Moussa Sissoko.

On a much brighter note, Paulo Gazzaniga was given a 2 and no player on the pitch scored better.

They rated Jose Mourinho with an ‘average’ 3.