Liverpool’s Georginio Wijnaldum has been linked to Barcelona, and on Saturday, Mundo Deportivo explained why Ronald Koeman ‘endorses’ the midfielder’s signing.

Sport now claim the possibility of the 29-year-old arriving at Camp Nou is ‘beginning to take shape’, more so after Koeman made his signing a ‘priority’.

The Reds player has now become a ‘non-negotiable goal’ for the former Everton manager.

Wijnaldum’s contract lasts until 2021, and no renewal looks imminent with the Merseyside club. Liverpool may be encouraged to open the door for his sale this summer to avoid losing him for nothing a year later. 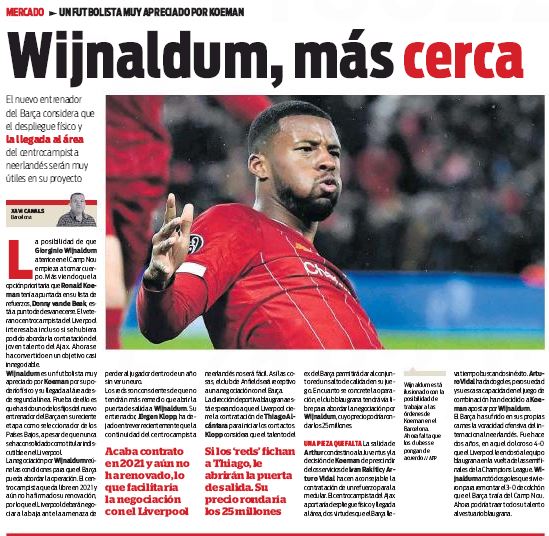 According to the report, Barca are waiting for the Premier League winners to ‘close’ Thiago Alcântara’s signing from Bayern Munich, to initiate contacts for Wijnaldum.

Those in charge at the Catalan club believe they will have a ‘free hand’ to address the Dutchman’s signing, once Liverpool secure Thiago’s services. Sport believe Wijnaldum would cost around €25m.

Mundo Deportivo also has an update on the former Newcastle United man, and their title reads, ‘Silence from all parties around Wijnaldum’.

Within the report, it’s explained Barca are not responding about the recent reports linking them to the midfielder, while they don’t completely rule out his arrival.

The player is aware he will lose prominence if Thiago arrives at Anfield. However, his entourage doesn’t want to provide any excessive clues about his future.

Mundo contacted his agent Humphry Nijman regarding the possibility of Wijnaldum leaving Liverpool in this window.

The representative insisted he doesn’t discuss transfers, but didn’t rule out ‘existence of contacts and negotiations’, most likely with Barcelona. 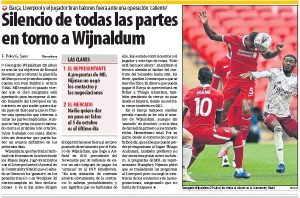 Mundo state all parties are working with the ‘utmost discretion without ruling out that there may be a definitive advance in the coming days’.