Whilst the reports of Sadio Mane being offered to Barcelona may be annoying for Liverpool supporters, they’re probably right to think there’s not an awful lot to be worried about.

Barca remain scared of the Reds in negotiations and don’t appear to be ready for a fight this summer, having enough problems elsewhere.

When it comes to Georginio Wijnaldum, things may be different.

With a contract expiring in less than a year, the midfielder’s situation is getting to the stage where he needs to renew or a sale must be considered.

That gives Barcelona a little more power in any potential negotiations. Mundo Deportivo report that Ronald Koeman ‘endorses’ the player’s signing, and the newspaper then goes to great lengths to explain just how useful Wijnaldum could be.

They explain that he’s a complete midfielder, which is a rarity these days. Someone who is both technically gifted, but also willing to work for the team. 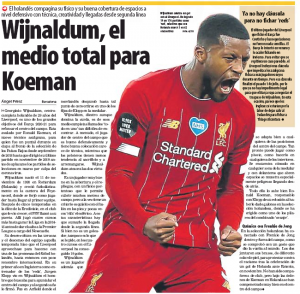 On top of that, Koeman knows him well, and Wijnaldum has a good relationship with Frenkie de Jong, both on and off the pitch.

Barcelona would need to offload some players before making a move, and that could give time for Liverpool to get a renewal sorted.