Watford’s Pervis Estupiñán spent last season on loan at CA Osasuna and finished the campaign with a goal and seven assists in all competitions.

The La Liga side had initially agreed to take the left-back on a two-year loan deal, but the Hornets decided to cut short his temporary stay with them.

Estupiñán has drawn attention from a handful of clubs across Europe, and Barcelona are included on the list.

Three days ago, Mundo Deportivo reported the Catalan club have ‘discarded’ the option of signing the Ecuador international because of the Hornets’ demands.

Osasuna have also been trying to keep the 21-year-old for the new season, according to Monday’s edition of Mundo Deportivo.

It’s claimed the South American is an ‘almost an impossible dream’ for the Spanish side, and the possibility of the Watford player arriving at Osasuna is now ‘fading’. That’s because of the tough stance maintained by the English club. 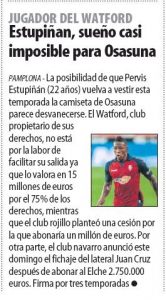 Osasuna were hoping to take Estupiñán on a loan deal by paying a fee of €1m. According to the report, Watford are not willing to sanction the defender’s sale for anything below €15m.

After Barcelona, Osasuna become the second club to discard signing Estupiñán because of the stance maintained by Watford.