Manchester United’s Juan Mata has offered himself to Real Sociedad on a free transfer basis, reports Monday’s edition of AS.

The Spanish newspaper explain that with Adnan Januzaj’s contract expiring at the end of the current season, and with no certainty over whether he’ll be staying where he is, La Real are currently looking at other options.

One of those is 33-year-old Mata, who also has a contract expiring at the end of the season. A stay at Old Trafford is very unlikely, and therefore a return home would be fitting for the player.

AS say that given his level of football ability, the career he’s had, and the subsequent experience, Mata is seen as a ‘more than attractive’ option for Real Sociedad. 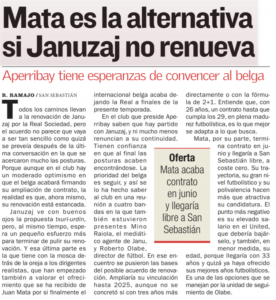 The major negative would be the player’s high wages, however, it’s unlikely he’d be able to get wages similar to what he currently earns at Manchester United.

Therefore, lower wages elsewhere is inevitable, which makes it likelier that the Spanish club could compete.