The Frenchman was the subject of interest from the Blues in the summer window, but they didn’t come close enough to what Sevilla wanted.

It was the same story as a year previously, when Manchester City were keen on signing the defender before they failed and then moved for Ruben Dias instead.

The report states that a switch in January would be difficult, given how important Kounde is to Sevilla manager Julen Lopetegui. 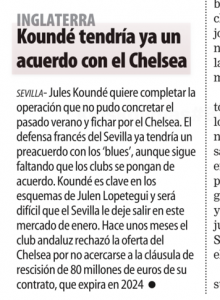 The club want Chelsea to get near the player’s €80m release clause, and the Blues have so far shown no sign of wanting to do that.

Therefore, it’s a case of waiting to see what will happen, and a lot will surely depend on what happens with some of Thomas Tuchel’s defensive contract rebels.