From time to time, the Chilean press comes up with surprising news on the future of national team stars, and we get to see one of those interesting stories today.

According to newspaper La Tercera, the likes of Arsenal and Aston Villa are both attentive to the moves that Alexis Sanchez is making this summer.

The 33-year-old, whose contract with Inter Milan expires this summer, is now said to be evaluating the options he has on the table, as he can join any club for free.

The story’s biggest focus is on Marseille, who have been showing ‘strong interest’. There they count on Jorge Sampaoli, who worked with Sanchez with the national team, to convince him of making the move.

Then another option that shows up is a return to Barcelona. That was a revealed by a source who’s said to be close to Sanchez.

“Marseille are one of the options that the player has on the table, but there are others that attract him the most, like Barcelona. After June 30th he will make a decision about his future.” 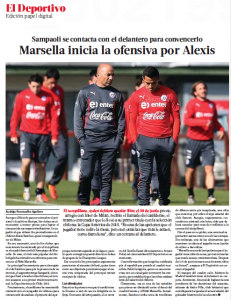 Only at the end of the story, La Tercera names three other clubs who’d like to sign the Chilean. Those are Atletico Madrid, Arsenal and Aston Villa.

The Colchoneros are said to have the player in their interest folder, while the Gunners are ‘awaiting the decisions’ made by him, and Steven Gerrard’s side are willing to ‘match the current salary’ Sanchez makes at Inter Milan.

With Arsenal clearly betting on younger options, we assume it’d be strange to see them going after Sanchez now, partly because of his move to Manchester United back in 2018.

Regarding Aston Villa, the salary they’d match is €8m net per season. Quite a lot for a 33-year-old, but certainly needed to convince him of choosing them over Barcelona and others. That stance from Villa seems unlikely.