With Everton being linked with a move for Oleksandr Zinchenko, it’s clear a left-back is on their mind.

The Toffees saw Lucas Digne leave for Aston Villa in January and replaced him with Vitaliy Mykolenko, but the Ukraine international will need some competition.

That’s where his compatriot would come in, but it’s also a spot that Luca Pellegrini, currently at Juventus, could take up if Everton decide to move for him.

He’s been placed in front of them on a platter by his agent, who appears to be Vincenzo Raiola following his uncle’s death in April, as reported by Corriere dello Sport. 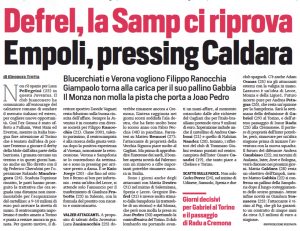 The newspaper claim Juventus ‘have communicated to the entourage of the Roman player to probe the Italian and foreign markets to seize new opportunities’.

That’s led to Pellegrini being ‘offered to Fulham, West Ham and Everton’, while Torino in Italy ‘are tempted by the idea of bringing’ the once capped Italy international across town.

We’ll have to wait and see if anything more comes from this, but with Frank Lampard likely to want new players to avoid a repeat of last season, it’s an opportunity to consider.