On Thursday we covered claims from Belgium that Marvelous Nakamba is a serious option for Aston Villa as they look for their next signing of the summer.

It was explained the newly promoted Premier League club are giving up on the idea of signing Kalvin Phillips, because his current club Leeds United are set against a sale.

With Club Brugge contacts already open from the Wesley Moraes transfer, Nakamba has appeared on the agenda.

Several offers, not from Aston Villa, were said to have arrived for the player, not of them seemingly pleasing the Belgian club. Italy’s Atalanta have also been credited with interest.

The claims continue in today’s edition of Het Nieuwsblad.

They state the player wants out and the message coming from his entourage is that it’s ‘out of the question’ he’ll still be at the club next season. They very much believe a transfer is happening. 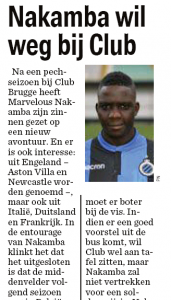 Club Brugge will sit down to negotiate, but it’s made clear they don’t feel the need to sell Nakamba in a cut-price move. They have him on a contract until June 2021, and want fair value.

Aston Villa have already provided that for Wesley, in a move which was pretty streamlined, and they may do so again for his former teammate.

Newcastle interest is also mentioned, but not a lot has been made of that this week.