Home Premier League From Belgium: Aston Villa give up on Leeds player, possibly signing another...
SHARE

Last week, Aston Villa came from nowhere, smashed the competition aside, and secured the signing of Wesley Moraes for €25m.

Others had been interested, with claims flying around in the Belgian media for months, but the newly promoted Premier League club showed how to get a transfer done with minimal fuss.

They’re not finding it so easy with all their targets, one of those being Leeds United’s Kalvin Phillips. Several clubs are interested in the 23 year old, but Marcelo Bielsa’s club are holding firm.

Belgian newspaper HLN reckon Phillips is ‘not for sale’, so Villa will have to move on from the Leeds man. 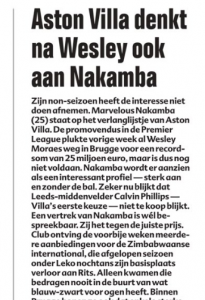 And their eyes would turn to Club Brugge again.

With contacts already well in place after the Wesley deal, Villa are keen on 25 year old Marvelous Nakamba.

Several offers have arrived for the midfielder already (not from Villa), and Club Brugge will sell as long as they feel they get the right price.