Home Pick of the Week “You have to ask him” – West Ham player in controversy after...
SHARE

Marko Arnautovic is facing some controversy in the Austrian media.

The West Ham player captained his national side against Bosnia on Tuesday, as they lost 1-0 due to a goal from Edin Dzeko.

Later that night, or rather the next morning, Edin Dzeko posted an image to Instagram (which now appears to have been deleted) of himself with Arnautovic along with the word ‘brothers’.

The 3am Sarajevo snap has ’caused a stir’ reports Austria’s Kronen Zeitung newspaper, and the country’s national manager has been questioned about it.

Some players were set to fly back to Austria directly, and so returned to the team hotel, whereas others, including the West Ham striker, were free to make their own way back to their clubs.

Austria boss Franco Foda is quoted as saying: “After the game, as usual, there was a medical check-up for all players, if everyone is fit, that’s the rule. After that, one or two players were dismissed, as some were to travel back in the morning. This includes Marko Arnautovic. I believe that his flight departed from Sarajevo at 7am.

“He did not go back to the hotel with us, like one or two others. In that sense, it was no longer my responsibility.

“He’s old enough, grown up, has kids, and he knows what he’s doing. Everything else you have to ask him.” 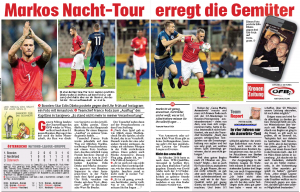 Kronen Zeitung call it ‘Marko’s nocturnal tour’, and state they haven’t been able to get comment from West Ham or Arnautovic directly.

From a club perspective it’s not really a big deal, as long as he had permission for a night out, or at least wasn’t instructed not to. West Ham don’t play until Sunday.

In Austria it seems to have caused annoyance for some, and clearly the national manager wasn’t thrilled to be asked about it.

There is another, more positive, angle which could be spun on this. In the run up to the match, Arnautovic was questioned about the hostile welcome he was expected to get in Bosnia, given his Serbian background.

West Ham’s striker said: “You have to switch that off and concentrate on the game, I have my tasks to fulfil.

“But personally, I have no hatred for Bosnia, as well as for Croatia and the whole Slavic countries.

“Of course all the countries still believe that we are in some kind of war, but for me it does not exist anymore, I respect every country and wish you all the best, we do not need to talk about war anymore.”

Given that, the picture with Dzeko and the ‘brothers’ message seems positive.