Mexico won’t give up on Marcelo Bielsa.

Every couple of days or so someone involved in the country’s football comes out and states the Leeds United manager is the one who can lead the country’s national team forward.

Despite already being in a job he’s in all the lists of potential managers, although the difficulty of contracting him isn’t ignored. It’s a dream for many within the country’s game, and until Mexico have a new boss, the Leeds coach is going to be in the mix.

Now they’ve got some help from Argentina. Cesar Delgado is one of the many South American footballers to have worked with Bielsa and been left a disciple of the manager.

The former international is quoted by Reforma as saying: “If you give me a choice, I choose Marcelo Bielsa, to revolutionise Mexican football, I would love for Marcelo Bielsa to take the Mexican national team.

“For his way of working, for his demands, for his way of thinking, he lives for football, every second, very intense, every training is an official match, and treats everyone equally, respectfully.

“He is very organised, he does a very good job, which in his time has helped me a lot and would be good for Mexico.

“He worked here in Mexico and he knows football in Mexico, he could contribute positive things to the Mexican national team, it’s a decision for him, he’s a very experienced manager…” 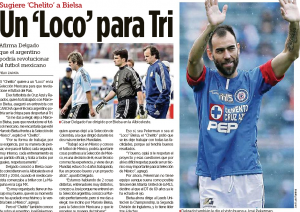 It does all make perfect sense. On the face of it, Bielsa is the perfect coach to take Mexico forward, especially given some of their play at the World Cup in Russia.

But, despite the countless links and claims, and borderline pleading, the major problem still remains: Leeds United.

Given the good start it’s unlikely Bielsa would consider an exit and it’s even less likely the Championship club would be willing to release him from his contract.