With Per Mertesacker pretty much already calling it a day and Laurent Koscielny on the wrong side of 30, Arsenal are going to need a new centre-back soon.

Well, according to Mundo Deportivo, they’ve already got someone in mind, and that’s Toulouse’s Issa Diop.

The Catalan newspaper claim the Gunners are one of a handful of clubs after the 21-year-old, alongside their arch rivals Tottenham.

With Toby Alderweireld’s long-term future at Wembley still up in the air, there might be a gap in Mauricio Pochettino’s squad for a new centre-back sometime in the near future.

At least, that’s what Mundo Deportivo are reporting the thinking is at Wembley, as both London clubs appear to be in the lead in the race to sign him ahead of the likes of Real Madrid, Inter and Barcelona, having already ‘taken a step forward’ towards doing so. 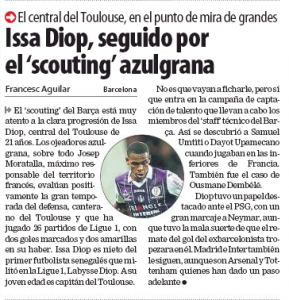 Yes, an interest from the latter of the three is why the Catalan media are covering this, yet they don’t appear to be in any rush to sign him.

Mundo say as much, merely pointing out he’s now in their ‘talent recruitment campaign’, which is how they discovered the likes of Samuel Umtiti and Ousmane Dembélé in the past.

To us, Arsenal makes the most sense, at least in terms of need.

Do Rob Holding and Callum Chambers have a long-term future at the club? They’re certainly not as experienced as Diop, who already has 80 first-team appearances for Toulouse, where he is now captain.

As for Tottenham, he’d have to sit behind Davinson Sanchez, Jan Vertonghen and potentially Toby Alderweireld for a bit. And there’s also Juan Foyth, who arrived from Estudiantes in the summer.

Either way, he’s destined for a future at a bigger club soon, and Mundo feel it could be in the Premier League.