Lyngby have been saved from bankruptcy by a group of local investors and now the Danish club look to a more optimistic future.

That future could involve Aston Villa, who have been linked with a swoop for the club in recent weeks. With there now being no immediate danger of Lyngby going out of business, there hasn’t been a big rush for Aston Villa, but that could change.

Danish newspaper BT report officials from the Championship club were in Denmark on Monday as they talked to Lyngby about a possible partnership, but now Club Brugge have returned to the situation.

The Belgian club were keen on Lyngby themselves, and also held meetings a couple of weeks ago, but they walked away because of the rush of a deal and the immediate financial problems. 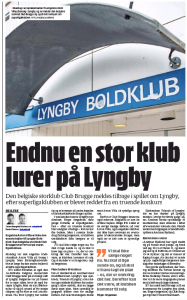 Now that’s all sorted out with the Danish club being owned by ‘Friends of Lyngby’, BT have their own information stating Brugge are once again considering a deal.

That puts some pressure on Aston Villa, which could be the purpose, and now Lyngby aren’t quite as desperate as they were a couple of weeks ago.