Often seen as one of the more underrated players in Serie A due to the club he plays for, Udinese’s Rodrigo de Paul has a number of suitors after him.

Among those are said to be Arsenal, according to Corriere dello Sport, who reveal the information amid a big article suggesting Milan could turn their intention to the Argentine this summer.

At 26 years of age, there is a feeling de Paul should try and get a better move for himself while he still can, and he seems to agree, ‘wanting an important experience’.

Corriere point out that with seven goals and six assists in 35 league appearances, and doing so with the captain’s armband more often than not, there’s a reason why teams like Milan and Arsenal are interested.

There are a few other big clubs, like Napoli and Juventus, also keeping an eye on him, and the newspaper explain the Gunners ‘have recently joined’ them from overseas. 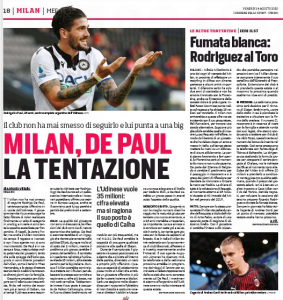 It’s said his agent, Augustin Jimenez, has ‘received many phone calls’ and is planning ‘business trips to start seeing representatives of clubs who are concretely after de Paul’.

As Corriere say when they end their article, ‘the movements around the Argentine will be very interesting this summer’, especially if Arsenal are involved, because they never do anything in a boring manner.