What appeared to be a near done deal has turned into something of a nightmare for Lazio as David Silva is leaving them on read.

That’s what Corriere dello Sport go with on Friday (not in those exact words), claiming the Manchester City playmaker, whose contract at the Etihad runs out once their Champions League run comes to an end, is ‘not responding’ to the Serie A club.

He didn’t do so on Thursday, and with a big game coming up, he has a good reason to be focused elsewhere, but that doesn’t help Lazio.

The Italians ‘want to understand’ if they can count on him, since a big part of their transfer window is planned around him.

He was meant to give them the thumbs up via ‘a signature or an email’ on Monday, but that never happened.

It appears to stem from the player’s brother, who is said to have ‘appointed a pool of lawyers to investigate the contracts’ on offer.

For Lazio, however, everything is in order, they made big sacrifices, and they simply ‘don’t want to wait around for nothing to then be told no’. 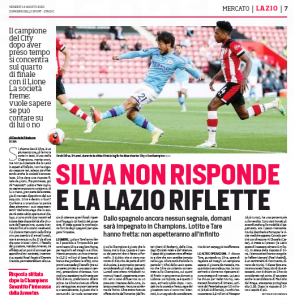 If Silva ‘has received more advantageous offers’, then they feel he should tell them.

If Silva ‘want to concentrate on the Champions League’, that’s fair, but he should tell them.

Lazio are a bit perplexed at the situation, and they just want answers.

Answers they currently aren’t getting.