Beating Turkey 3-1 on Sunday afternoon, Switzerland, led by Arsenal’s Granit Xhaka, now have to wait to find out if they will make it to the next round of the Euros as one of the best third-placed sides.

Finishing behind Wales on goal difference, the Swiss now have a few days to relax and see what the future holds for them, which could also be the ideal time for the aforementioned midfielder to sort out his future with the Gunners.

Wanting to leave the Emirates and team up with José Mourinho at AS Roma, Xhaka is waiting for the two clubs to find an agreement over his transfer fee after he already agreed a four-year contract with the Serie A side.

The problem there remains the lack of desire from both sides to budge on their value of the player, with the Italians offering closer to €15m than the €20m or so Arsenal are expecting.

Corriere dello Sport cover the situation on Monday, stating it is ‘up to Tiago Pinto to close an already well underway negotiation’ with the Gunners. 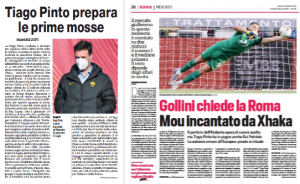 Furthermore, ‘Xhaka has already made it known’ to his current side ‘that he will not accept other destinations’.

This is somewhat echoed by Il Tempo, who state the negotiations have currently ‘run aground’, as Roma are still ‘waiting for the English to lower their demands for the Swiss’.

Basically, we’re in a somewhat boring and ugly game of chicken between two football teams, and neither appears to want to stray off course for the time being.