Somewhat helpless as Germany put four goals past him on Saturday evening, Rui Patricio will try to redeem himself on Wednesday when Portugal face France in a crucial game to determine the potential winners of Group F.

In the meantime, those in charge of his future at club level continue to do their work in the background, with Corriere dello Sport claiming he has an ally in José Mourinho over in Rome.

Both the Wolverhampton Wanderers player and Pierluigi Gollini are being looked at by Tiago Pinto to replace Pau Lopez between the sticks, and while the Italian is the general director’s favourite, Patricio is the manager’s.

The Wolves man has already ‘expressed enthusiasm’ at the prospect of the move, and Mourinho ‘would prefer to entrust the role to a more experienced player, precisely his compatriot’. 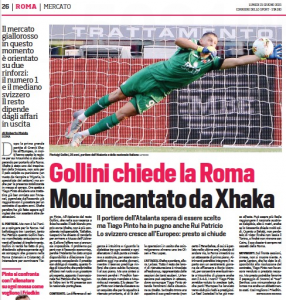 It’s well known that the Portuguese manager likes to have ready made signings at his clubs, while Pinto is more thinking about the future, and so a ‘problem’ is arising.

This could explain the derisory offer currently on Wolves’ table for Patricio, as Pinto tries to lowball the Molineux side for their experienced goalkeeper, seeing little value in overspending on a 33-year-old, regardless of his qualities.