Announcing that he was leaving Arsenal at the end of the season, having agreed to join Juventus in the summer, Aaron Ramsey could easily have given up on the remainder of the campaign and been happy with bit part roles handed to him by Unai Emery.

However, that isn’t who the Welshman is, remaining professional to the very end and working his way into the Spaniard’s starting XI against Tottenham at the weekend, which ended in a 1-1 draw.

Providing his usual energy in midfield, Ramsey also got himself on the scoresheet in the first half, latching onto Alexandre Lacazette’s through ball before rounding the onrushing Hugo Lloris and slotting home with his left foot despite strong pressure from Victor Wanyama.

His goal, and performance, earned him a spot in Gazzetta dello Sport’s European Team of the Week on Monday, given a 7/10 for his efforts, where he was joined by Rafa Silva (Benfica), Ivan Rakitic (Barcelona) and Nice’s Yousef Atal in the midfield. 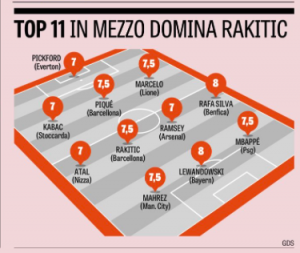 Despite only playing 40% of Arsenal’s minutes in the Premier League this season, spread over 24 appearances, the midfielder has still managed to pick up three goals and six assists.