Every summer transfer window has a good saga or two, and defender Gabriel Magalhães has managed to provide one nice and early this year.

The Lille centre back has plenty of admirers in Europe, with Everton and Arsenal in the Premier League and Napoli in Serie A all keen on him.

Earlier this year it appeared he would be on his way to Goodison Park before they pulled out of a deal due to the economic impact of the Coronavirus outbreak.

That saw Napoli then rushing to the front of the queue for his signature, with them identifying him as a replacement for Kalidou Koulibaly, who looks destined to join Manchester City.

For several weeks they appeared to have a deal wrapped up before that changed drastically in the last week, when Arsenal suddenly emerged as favourites.

Reports in France first signalled their interest, and it quickly picked up from there, with the latest claims stating that they were ‘very close’ to sealing a move and a deal was ‘due in coming hours’.

That’s been corroborated by several outlets in England, who all say Gabriel is on his way to the Emirates.

However, that’s not what they’re saying in Italy. Il Mattino cover the situation at Napoli today and explain that Gabriel is the replacement they’ve eyed up should Koulibaly leave. 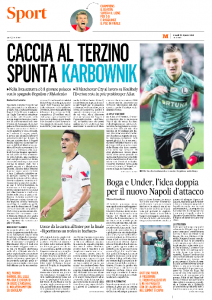 €25m. However, that is dependant on Koulibaly leaving first.

Lille, according to the report, are willing to wait to let Napoli sort that out and are willing to give them until the beginning of September. However, in the meantime, Arsenal have made their move.

The Italian sentiment, though, is obvious. Napoli are still at the front of the queue, and Lille are willing to give them time to get their finances in order to seal a deal.

That’s a direct contradiction of what they’re saying in France, where the belief is very much that he’s on the verge of a move to Arsenal.

Now, this could just be the Italian media sticking by their dog in the fight and insisting Napoli can still get their man ahead of the competition.

There are other, more worrying, scenarios for Arsenal. Given how Lille transfers have gone previously, it wouldn’t be a surprise if they’re sending out some of the claims to edge things along.

Should Gabriel want Arsenal, and they have the money to pay the transfer fee, then there’s nothing stopping this one happening now.