Home Europe Club waiting for Everton to make move for defender – ‘In their...
SHARE

Everton are interested in a move for Roma defender Alessandro Florenzi but need to sell Jonjoe Kenny before securing a move.

That’s what Il Tempo report today, covering claims that the Blues are interested in the Italian right-back this summer.

A report earlier this week stated that Everton are the ‘most dangerous’ suitors for his signature, with a later claim saying that contacts between the two clubs over him were ‘always alive’.

Il Tempo back up claims that the Toffees are interested today, stating that Roma are waiting with ‘great interest’ for Everton to make an offer for Florenzi, who have the player ‘in their sights.’

Florenzi, for his part, is keen to leave Rome permanently after spending last season on loan at Valencia, and has already spoken to his former teammate Lucas Digne about a move to Goodison Park.

Everton, though, need to find a suitor for defender Jonjoe Kenny before they can push forward with a move. 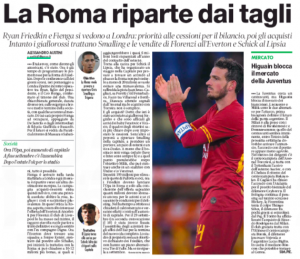 The youngster spent last season on loan at Schalke and has returned this summer.

He’s set to be a part of Carlo Ancelotti’s squad moving forward but there has been talk that he could be moved on.

Should that happen it’s claimed that Everton will then be able to ‘close’ a deal for Florenzi at around €10-12m plus bonuses.