Gabriel dos Santos Magalhães, usually referred to as simply Gabriel, is finally on the verge of a transfer, report L’Equipe.

The Lille defender has been in the middle of a transfer saga for months, with it originally being reported he was set to sign for Everton. There were even reports of a medical with the Toffees, yet that move has slipped away.

Then it was Napoli most linked, seeing the Brazilian as a replacement for Kalidou Koulibaly. Given they haven’t yet managed to sell their own player, the Serie A club have been stalling with their Gabriel attempts.

L’Equipe say the Lille man is now ‘very close’ to signing for Arsenal and bringing an end to all the reports. According to the French newspaper, the Gunners have ‘never been so close’ to the signing and a deal is ‘due in the coming hours’.

Everton have ‘left the track’ and seemingly moved on to other targets, with signing a 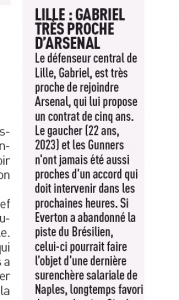 midfielder being of greater concern. Napoli could make a new salary offer, to try and beat Arsenal to the move, and L’Equipe state if that doesn’t happen then Mikel Arteta’s side will finalise things this week.

Arsenal are expected to pay €30m for the player.