Arsenal goalkeeper Bernd Leno has admitted he may have to look for a move away from the club come the January transfer window.

That’s according to SportBild, who say Inter Milan are eyeing the German goalkeeper as a potential replacement for Samir Handanovic.

They explain that Leno has been forced to put on a ‘good face’ at the Emirates in the last few weeks after being replaced by Aaron Ramsdale as number one.

According to them, Leno was ‘in a frenzy’ after the recent win over Tottenham after Mikel Arteta had changed his mind on who would be his number one ‘without giving any reason’.

“There was no clear reason why I was out, but it had nothing to do with my performance. He is the trainer, he decides. Of course, it’s difficult for me,” Leno is reported as saying about the decision.

He now may be forced into a change in the summer, particularly as he will need to be playing regularly if he is to maintain his recently earned promotion to Germany number one.

And according to SportBild’s information, Inter Milan are ‘interested’ in the Arsenal man and could make a move in the winter.

They are looking for a successor to Handanovic, who is 37 and is set to see his contract expire next summer, and are currently ‘waiting in the wings’ to see what happens at the Emirates. 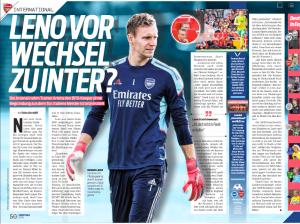 The move is not one that Leno is contemplating at this moment in time, but he did admit he will look at the situation if things don’t change for him at Arsenal.

“London is very nice; Milan is not bad either and closer to my home Stuttgart,” he added.

“But I’m not seriously thinking about that yet. I feel comfortable at Arsenal and in London.”

“Only if nothing changes in my situation by winter would I have to think about things: what option do I have, how can I continue? But I’m concentrating on my work in training; I can’t commit to anything else at the moment.”