Nabil Fekir is edging closer to a transfer to Real Betis, report L’Equipe, but Arsenal remain in the picture as a potential destination.

Since his failed move to Liverpool last summer, the Frenchman’s value has plummeted. Despite that, he’s insistent on finding a new home for his talents this summer and it’s, of course, partly about wages.

Monday’s edition of L’Equipe reports Fekir currently earns around €350k gross per month at Lyon, and this would increase to around €600k at Real Betis.

Arsenal ‘maintain contact’ with the player’s camp as they wait to find out more about Mesut Ozil’s future.

For the Gunners, the transfer fee wouldn’t be as prohibitive as it once was. The French newspaper explains Liverpool were set to pay €65m last summer, and now Fekir could leave Lyon for as low as €25m with bonuses. 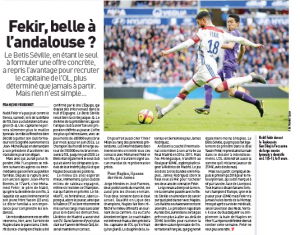 Ozil would appear to be holding Arsenal back on several tracks, and the player’s situation isn’t an easy one to solve.