Stoke City signed Saido Berahino from West Bromwich Albion in Janaury 2017 and the forward took more than 18 months to score his first goal for the Potters.

After struggling with Stoke, the 25-year-old wants to revive his career, which is why he’s been training with Belgian side Zulte Waregem.

He still has three more years left on his contract at the bet365 Stadium, but the Burundi international’s idea is to leave the Championship side in the summer transfer window.

Zulte Waregem will not be in a position to pay a hefty transfer fee to acquire his services, so he join them by terminating his contract with Nathan Jones’ side. Berahino has further made it clear he wants to leave England in the ongoing window.

“My contract has not yet been terminated, but we are working on that. The financial picture is not that important. I don’t want to stay in England. This is the right step to rebuild my career. I want to stay here [Zulte Waregem],” Berahino was quoted as saying by Het Nieuwsblad.

“I heard many good things about the coach through [Romelu] Lukaku (former West Brom teammate). [Zulte Waregem manager Francky] Dury brings out the best in players. We will see what the best solution is for everyone.”

Meanwhile, Dury has also opened the door for his side to sign the Stoke attacker after expressing his “love” for Berahino.

“There are three parties to this story. Berahino, his club Stoke and then you have Zulte Waregem,” Dury said. 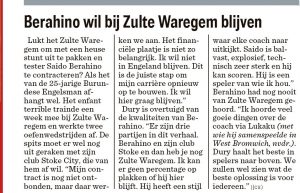 “I can’t stick a percentage on it if it stays here. He has a style that every coach is looking forward to. Saido is ball-proof, explosive, technically very strong and he can score. He is a player I love.”