At the weekend, Spanish outlet Fichajes featured a piece claiming that Arsenal and Liverpool are interested in signing SC Braga winger Ricardo Horta.

It was said that Gunners and Reds are the ‘best positioned’ sides for his transfer, and a deal could be done for around €20m.

So it’s no surprise that several Portuguese outlets have been covering the story, and despite the excitement about the rumour, it’s clear that it won’t be easy to take the captain away from the arsenalistas.

Newspaper O Jogo is the one who brings the biggest piece, and points out that even though ‘in other context’ it’d be obvious for Horta to move to the Premier League, the player’s history leaves some doubts about it.

That’s because the winger turned down a €15m move to Atlanta United in 2019, signing a new deal with Braga as proof of his love for the club. So Arsenal and Liverpool would need to be more convincing than the MLS side. 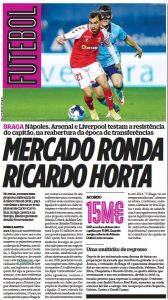 Meanwhile, we get to see newspaper Record with a piece for which they spoke to their sources about Horta’s future. And instead of dismissing or confirming the Gunners and Reds’ interest, all they managed to do was to add that Lazio are interested in the signing as well.

Regarding the winger’s price, newspaper Jornal de Notícias points out that Braga are well ‘safeguarded’ regarding the possibility of a €20m deal, since the player is protected with a €30m release clause.

So considering how important he is for the club and the more expensive players are in the January window, it wouldn’t be a surprise to see the Portuguese side demanding that much to let him go this month.