Steven Bergwijn has made only three league starts for Tottenham Hotspur this season and all of them came in August, under Nuno Espírito Santo.

Spurs sacked the former Wolverhampton Wanderers coach in November and replaced him with Antonio Conte.

The Italian’s arrival has not helped the forward, who has been given only 39 minutes of action in the league across three appearances. His situation at the north London club has caught Ajax’s attention, who are looking to sign him in the winter market.

Conte had hinted the 24-year-old is still in his plans, but earlier reports from the Dutch press indicated the manager’s comments have no bearing on the player’s chances of leaving Tottenham. 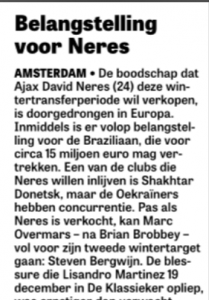 Ajax have agreed a deal with RB Leipzig, to take Brian Brobbey on loan until the end of the season.

De Telegraaf now explain Marc Overmars, the sporting director of the Amsterdam club, can ‘go fully for the second winter target; Steven Bergwijn’, but only after David Neres is sold.

It’s claimed there is a lot of interest in the Brazilian and Shakhtar Donetsk are one of the clubs that want to sign him in January. Only after Ajax sell Neres, can Overmars look to sign the Tottenham player this month.