Aksam report there are a growing number of Premier League clubs, including Arsenal, interested in signing Domagoj Vida.

The Besiktas defender could leave the club at the end of the season because of Besiktas’ poor financial situation, and Aksam claim Arsenal could be his next destination.

It’s reported that along with Arsenal, West Bromwich Albion are still interested in signing Vida, who Besiktas value in the region of €10m. There have been recent reports West Brom are keen on the defender as Slaven Bilic looks to raid his former club.

According to Aksam, there are also other Premier League clubs who could sign Vida, but they have yet to make a decision about the 31 year old. 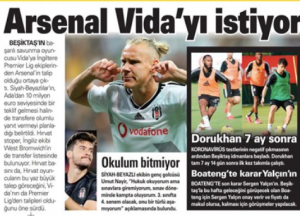 Vida is the highest earner at Besiktas, and the Turkish club would like to sell him to reduce their wage bill for next season.

This year he’s made 32 appearances for Besiktas in all competitions, scoring four goals. His contract at the Vodafone Stadium will expire at the end of June 2022.

“It will be a blast” – Ex Newcastle man excited by potential takeover, labels fans ‘incredible’