Fotomac claim Galatasaray manager Fatih Terim has identified Liverpool’s Xherdan Shaqiri as a potential transfer target and will make a move for the Swiss international if Gala win the Super Lig this season.

Terim is reportedly a big fan of the 28 year old, and the player was heavily linked with a move to Galatasaray when he was with Basel. The Turkish side even informed the Stock Market (KAP) at that time, which they do when a deal is close, but he ended up joining Bayern Munich.

It’s reported the Liverpool winger won’t need convincing over a move to Galatasaray if they qualify for the Champions League title. 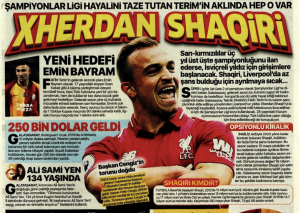 According to Fotomac, Galatasaray will make a loan offer with an option to buy for Shaqiri.

The former Stoke City winger is said to be keen to leave the Premier League club after failing to get regular games for Jurgen Klopp’s side.

Shaqiri has only made nine appearances for Liverpool in all competitions this season, scoring one goal.