Home Premier League Chelsea ‘Among those chosen’ – Chelsea have signing ‘in their sights’ for summer...
SHARE

Chelsea have Atlético Madrid midfielder Saúl ‘in their sights’ this summer as he becomes a serious candidate to leave the Spanish club this summer.

AS report that after there being a ‘big story’ around Saúl every summer, this year he seriously finds himself ‘in the shop window’.

In the past, there have been suitors, but Atlético have always slammed the door in their face because they were not keen on letting him go.

That has now changed, and the ‘door is ajar’ as the club know that they need to sell before they can buy due to the after-effects of the Coronavirus pandemic on their finances.

Saúl is one of the ‘most attractive’ options they have to sell, and there is a feeling that the rumours could ‘catch fire’ this summer.

There will be meetings with the club and player in the coming weeks, and ‘it is not unreasonable’ to imagine a future without him in the team.

The suitors are already lining up, and there is ‘no shortage of offers’, with the German press already having made claims of an €80m offer from Bayern Munich. 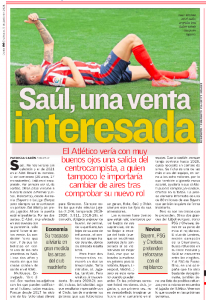 But they are not the only ones who want him, with PSG and Chelsea also having put the midfielder ‘in their sights’.

AS explain that the new champions of Europe are looking for ‘reinforcements’ in midfield, and Saúl is ‘among those chosen’.

Chelsea would also face competition from PSG, though, who have Saúl on their list of possible reinforcements as well.

At the minute, it appears neither have made their moves as yet, with the midfielder needing to sort things with Atlético first but AS do say that things will be known ‘in the coming weeks.’