Four days ago, ESPN reported new Arsenal manager Mikel Arteta is targeting a centre-back and an attacking midfielder in January.

For the latter, it was claimed Thomas Lemar’s ‘name has also been mentioned as another attacking option’ following his struggles at Atlético Madrid.

These claims have been picked up Friday’s edition of AS and they have assumed that ESPN reported the Gunners are ‘interested’ in the 24-year-old.

Prior to joining Diego Simeone’s side from AS Monaco in 2018, the north London club were interested in the France international.

The newspaper states Lemar is not considered ‘transferable’ by Atlético and they view him as an important player for the present and future. 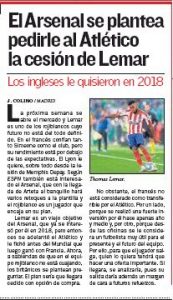 AS also adds for Lemar to leave the La Liga side, interested clubs like Arsenal or Lyon (also linked) will have to make an ‘important offer’.

If Atlético receive it, they will then analyse it as the funds will help them in signing new players.

It remains to be seen if Arteta’s new side will make that ‘important offer’ for Lemar, who has failed to score or manage an assist in the league or Champions League this season.