Ole Gunnar Solskjaer knows Erling Haaland first hand as the Manchester United manager coached the striker when the two were at Molde.

This time last year, there were multiple reports across Europe suggesting Solskjaer’s past connection with the 20-year-old could be vital in helping the Red Devils to sign him.

Manchester United failed to complete the star’s transfer and he ended up moving to Borussia Dortmund in the winter 2020 market.

Solskjaer had earlier compared the Norway international to one of his former players and current Inter Milan striker, Romelu Lukaku.

Mino Raiola acted as a consultant in helping Haaland get a move to the Bundesliga side.

In an in-depth interview with Italian newspaper Tuttosport, the super-agent has dismissed the suggestion made by the United manager regarding the 2020 Golden Boy winner, and also gave some advice to Solskjaer.

“Solskjaer is a good guy, but Haaland is nothing like Lukaku. The only thing that’s similar between them is the jersey number 9. I have never seen a mature centre-forward like Erling at his age, perhaps only Ronaldo the Phenomenon and Zlatan,” Raiola said.

“Erling is like Ibra at twenty. He has the same desire to work and to become the strongest. Solskjaer, instead of comparing Haaland to Lukaku, must find a way to make Pogba play like a champion.” 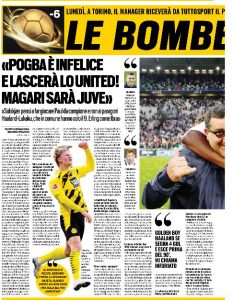 Haaland’s goalscoring abilities for Dortmund has seen him attract interest from top European clubs, including United.

Reports from November stated the Premier League side have the set wheels in motion to sign the frontman and they could take Raiola’s help in completing the deal.

Raiola has insisted he shares an “excellent” relationship with United despite publicly stating on Monday he wants to take “unhappy” Paul Pogba away from Old Trafford.

Distancing Haaland from Lukaku may have something to do with the latter ditching the agent.