Manchester United have ‘put in place the mechanism’ to sign Eduardo Camavinga and also want Erling Haaland, according to AS.

The Rennes midfielder and the Borussia Dortmund star have been identified as future transfer targets for Real Madrid.

Los Blancos’ priority is to sign Kylian Mbappé next summer and if they manage to sign the Paris Saint-Germain forward for a ‘reasonable price’, they will consider making an approach for Camavinga. Haaland is a transfer goal for the La Liga winners in 2022.

It’s claimed Real Madrid’s future plans face ‘great threat’ from the Red Devils as the 18-year-old and the Norway international are viewed as ‘strategic signings’ for the Old Trafford club.

United view Camavinga as a successor to Paul Pogba, and AS states those in charge at the English club are taking the World Cup winner’s exit in 2021 for granted. Therefore, they have already ‘activated’ the operation to sign the Ligue 1 midfielder.

AS states Camavinga has rejected a renewal offer from Rennes, and with a contract until 2022, he should be available for a reasonable price next summer.

Should United make it easy for Pogba to leave the club, it not only opens space in their squad to possibly sign the Rennes star, but it can also help them in landing Haaland.

Pogba’s agent Mino Raiola acts as an advisor for Haaland and the newspaper states the super-agent ‘may be the key’ in deciding the 20-year-old’s next destination.

According to the report, Raiola intends to start a fruitful relationship with Real Madrid after Pogba’s failure to join them in the past, and taking Haaland to Madrid could help him fulfil it. 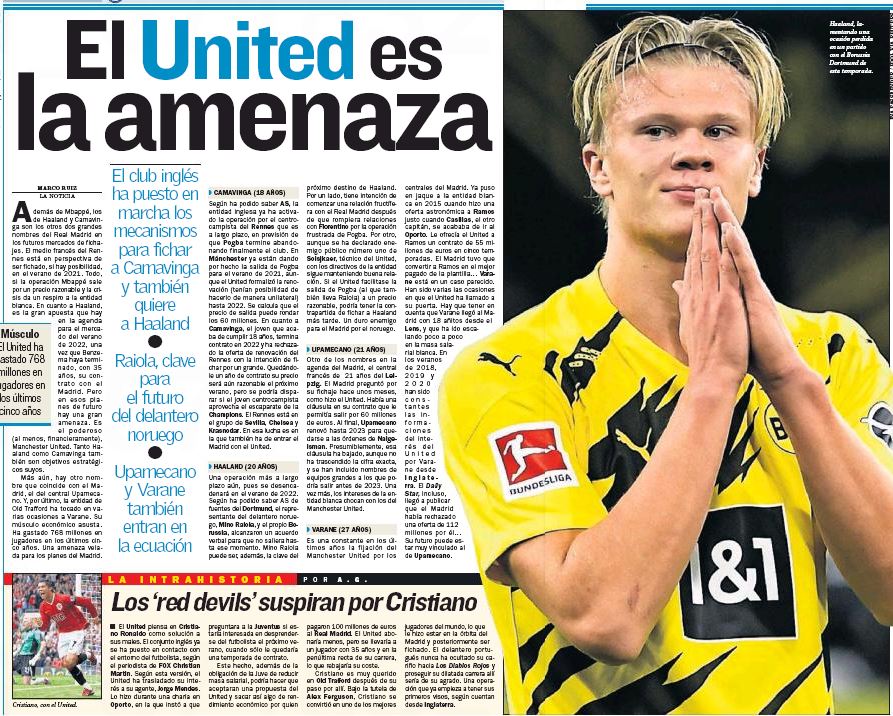 On the other hand, even though the agent doesn’t share a good relationship with Ole Gunnar Solskjaer, he continues to enjoy a good bond with the club’s directors. Pogba’s exit at a ‘reasonable price’ could then see Raiola help United sign Haaland instead.

Apart from Camavinga and Haaland, AS adds RB Leipzig’s Dayot Upamecano is also a target for both United and Real Madrid.